The Best Whisky in the UK

We think the Lagavulin 16 is the best whisky. It matured for 16 years in Bourbon and Sherry casks and comes from the Scottish island of Islay. It has been a popular classic from the smoky peaty area for years and can therefore be clearly recommended. In general, the tastes are of course different, which is why we can recommend each bottle listed here for a tasting. 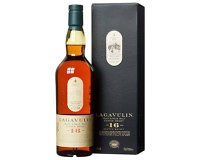 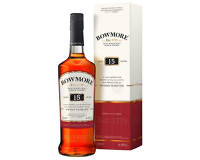 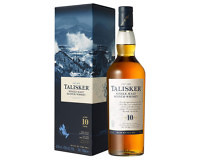 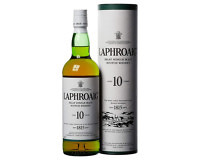 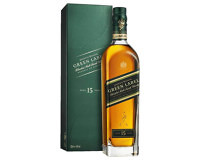 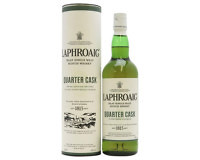 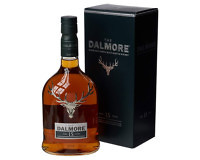 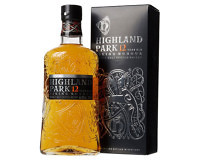 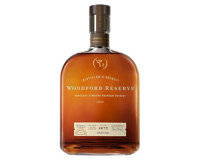 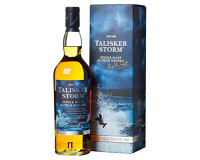 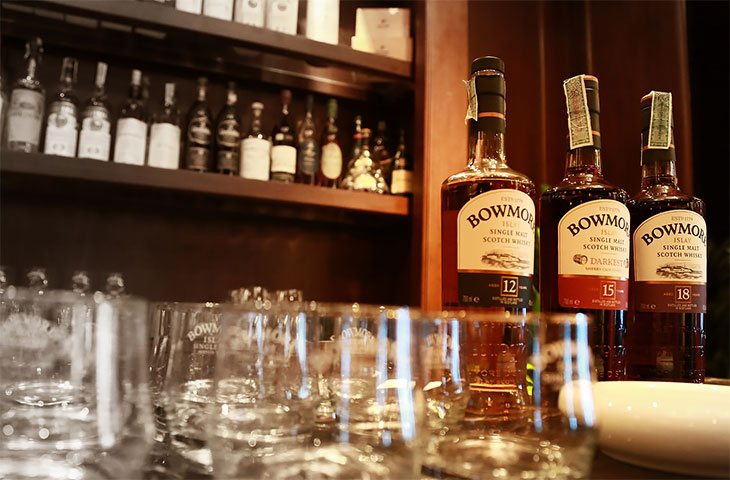 Whisky is a traditional drink that many people associate with countries such as Scotland, Ireland and the USA. The golden yellow palate is celebrated and drunk in style by connoisseurs. The choice between bourbon, single malt or blended whisky is enormous. In the following we will show you in detail which properties whisky has, where it comes from, point out special features and differences and shed light on the myth.

Water plays an important role in the home of whisky. In Gaelic the word means water of life. But what exactly is whisky? The drink consists of cereals such as rye, maize, wheat or barley. Whisky also matures for years in special oak barrels that were originally used for sherry or bourbon. The production itself is special. In the distilleries, the experts work with great attention to detail and spend several years on storage and perfect ripening. Whisky may consist exclusively of grain and must have matured at least three years in oak barrels and show an alcohol content of at least 40% ABV (alcohol by volume) with the filling. Bourbon and Scotch whisky are the best known. 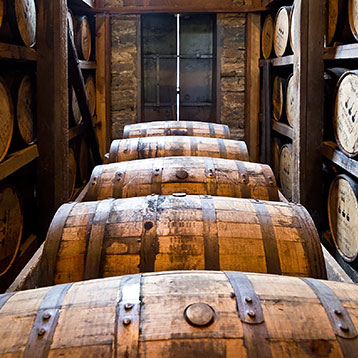 There are some differences in whisky and different varieties. The differences relate mainly to the production process, storage and processed grain. Whisky can be found on the market under various names, for example the differentiation according to grain.

Whisky is not just whisky, but there are some important quality characteristics that connoisseurs should know about. Of course, it also depends on the personal, subjective taste. The objective quality determines above all the quality of the raw materials and the careful processing. If you want to get an idea, you can orientate yourself here.

One point is the difference between a blended whisky or a pure whisky, the single malt. Another important question is how long the whisky was stored in the barrel. As a result, it can be a vintage whisky or a limited single barrel bottling. These single fillings are very popular with collectors.

Sugar couleur is often added to whisky. This is customary in order to give the whisky its amber colour. This has however only small influence on the taste. In addition, the whisky may have been cold filtered during production. This causes fatty acids to be secreted, which can cloud the whisky. However, these fatty acids also contain aroma substances, which the whisky ultimately lacks. The quality and purity of the whisky also depend on which spring water is used for its production. 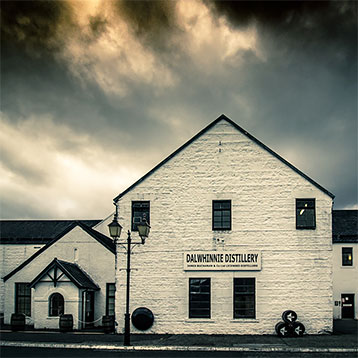 Whisky from Scotland is produced today in approximately 100 distilleries. The distilleries and the drinks produced there are classified according to regions with a typical characteristic note. Scottish whisky must meet a number of criteria. For example, it must contain water and malted barley. In addition, the whisky must be stored for at least three years in bonded oak compartments with a capacity of up to 700 litres in Scotland. Water and sugar may be added before the whisky is bottled.

The most important regions in Scotland are the Highlands, Speyside, Lowlands, Islay and the Islands. Depending on the region, the whisky tastes aromatic, tart, fruity, salty or earthy peaty.

Irish whiskey is no different from its Scottish counterpart in terms of production. The special features of the Irish whiskey are the processing of oats, the storage in oak compartments and the triple distillation. In addition, the mash is not dried over peat fires, giving the whiskey a milder taste. Blended or Irish single malt whiskey is the main type of whiskey on the market. The best known varieties are Jameson, Bushmills or Tullamore. In Ireland there are still mainly five production sites.

American whiskey is mainly made from rye, maize, barley or wheat. Regional differences exist in the respective composition of the grain mixture. This also influences the taste. American whiskey is divided into American Straight Whiskey and American Blended Whiskey. The first group includes rye whiskey made from rye, bourbon whiskey with a major proportion of corn, Tennessee whiskey, which is filtered over charcoal before storage, and corn whiskey, which contains at least 80 percent corn and is not distilled.

There is a fairly young tradition of whisky production in Japan. Since the 1920s, whisky has been produced mainly in the north of the country. The single malt is produced here according to the Scottish model. The Japanese have a great preference for whisky and also bought into Scottish companies. Well-known Japanese producers are Suntory and Nikka. 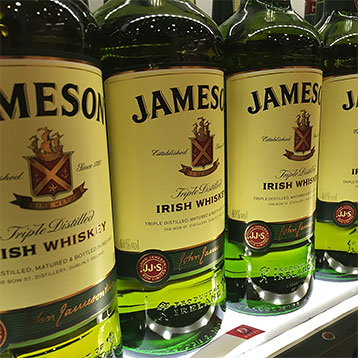 Jameson is a traditional distillery from Ireland. It was founded in 1780 by John Jameson in the capital Dublin. Until 1971 it produced its own distillery in Dublin, today there is a show distillery here. Today the production is located in Midleton in County Cork. Jameson mainly produces blended whiskey. In the 1960s Jameson merged with other distilleries, today it belongs to the French group Pernod-Ricard. Jameson became known worldwide with the products Jameson Original, Jameson Gold and Jameson Triple Distilled.

Laphroaig is one of the best known Scottish whiskies and comes from the Hebridean island of Islay. The old distillery buildings are listed and can be visited. The distillery was founded in 1815 by the brothers Alex and Donald Johnston in the coastal town of the same name. Previously it was a farm distillery for personal use. Laphroaig is the court supplier for the Prince of Wales and today belongs to the American-Japanese group Beam Santory. Well-known products are the Laphroaig 10, 15 or 18 year old and the Laphroaig Quarter Cask.

Glenfiddich is a whisky from the Scottish Highlands and comes from the village of Dufftown. The founder of the distillery in the Speyside region was the Grant family in the 1860s. The special feature of the company is that it is the distillery of Scotland, which is still owned by the original founding family. Glenfiddich is also one of the most popular brands in Germany and is known for the eye-catching triangular shape of its bottles. The product range includes Glenfiddich 12, 18 and 30 years, Rich Oak 14 years and Solera Reserve 15 years.

Talisker is also a Scottish whisky and comes from the famous Hebridean island of Skye. The distillery was founded in 1831 by the brothers Hugh and Kenneth MacAskill. Today the company belongs to the Diageo Group. Tourists can visit the distillery and sample whisky.

Chivas or Chivas Regal is a Scottish whisky from the Aberdeenshire region and is now a subsidiary of the Pernod Ricard Group. Queen Victoria made Chivas the purveyor to the court of Balmoral Castle. James and John Chivas founded the distillery in 1801. Today, Chivas is mainly sold in Asia, especially in Japan and China. Its products include Chivas Regal 12, Chivas Regal 25, Chivas Regal The Brothers Blend and Chivas Regal Gold Signature 18 year old.

4. How to Drink Whisky

You don’t drink whisky out of any glass. Connoisseurs argue about how whisky is drunk properly. While some people prefer whisky with ice, others prefer it as a rough faux pas. In any case, one should take enough time for Bourbon, Irish Whiskey or Scotch. Experts do not recommend tumblers, but nosing glasses. These have a small diameter, a thicker belly and preserve the aroma a little longer. 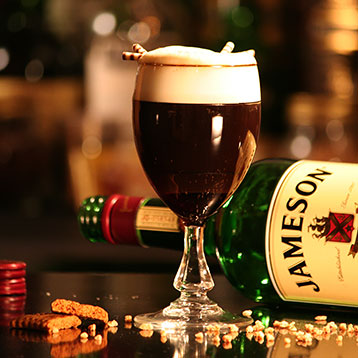 The Irish Coffee is a real classic and consists of Irish Whiskey, coffee, sugar and whipped cream. The coffee and whiskey are placed in a tall glass. The sugar is dissolved in the hot coffee. Shortly before serving, the garnish with the whipped cream follows. Connoisseurs appreciate the mixture of a bitter note of coffee and whiskey and the sweetness of cream and sugar. The drink is particularly popular in the cold winter.

The Manhattan is also a classic cocktail, especially popular as an aperitif. This requires American or Canadian whisky, wormwood and a dash of angustura bitters. At the bar you can choose between sweet or sweet, perfect or half and half as well as dry or dry. The drink is served in a martini glass with ice and cocktail cherry.

Whisky Sour is a classic among cocktails and especially popular because of its fruity note. The cocktail consists of whisky, sugar syrup and lemon juice. Ice cubes, a cocktail cherry and a slice of orange are added for decoration. Connoisseurs particularly appreciate the contrast between the fruity citrus note and the sweet woody whisky, as well as the refreshing effect.

Whisky can also be used in many different ways for cooking and baking, for example in sauces, cakes and pastries such as muffins or in desserts.

6. Whisky as an Investment – Which Ones Are Suitable?

In addition to classics such as equities or real estate, whisky is also suitable as an alternative investment. Scotch whisky in particular has turned out to be an insider tip for investors. Collectors should inform themselves comprehensively about the possibilities. Of particular interest are strictly limited special bottlings or, for example, the post-war years in the late 1940s and early 1950s, when barley was rare. When collecting, it makes sense to concentrate on certain distilleries. In addition, experts recommend using a certain budget. Recommendations include Bowmore Claret, Black Bowmore, Macallan 25th century 1974 or Glenmorangie Tain L’Herimitage. It is important to only trust proven connoisseurs and specialist dealers or specialised auctions when making your selection.

Both spellings are correct. Whisky is the preferred spelling in Scotland and Great Britain as well as on the European mainland, whereas whiskey is common in Ireland and the USA.

What Do You Eat for Whisky Tasting?

What Is the Most Expensive Whisky in the World?

The most expensive whisky in the world comes from Scotland. In 2014, one of four Macallan M bottles, exactly one six-litre crystal decanter, was auctioned at Sotheby’s for a proud 628,000 dollars.

How Many Calories Does a Whisky Have?

Like other alcoholic beverages, whisky is rich in calories. A glass of whisky of 100 ml has 227 kcal or 951 KJ and is compared with values such as 100 grams of chocolate ice cream or six chicken nuggets.

What Is the Difference Between Whisky and Rum?

The starting point for whisky is grain, for rum it is sugar cane or molasses. White rum is not stored in barrels, but brown rum and whisky are. Rum is usually sweetish in taste, whisky can also be fruity and sweet, but also smoky, tart and more varied.

Actually, whisky can’t become bad. Unopened whisky is stored upright. This is due to the cork, which is not as tight and therefore not as dense as wine. Whisky evaporates over time, but can be stored for up to ten years. Whisky that has been opened evaporates faster and changes its taste. When opened, the whisky lasts about six months.

Gin is currently probably one of the hottest lifestyle drinks in the UK. Gin, also commonly known as juniper spirit,...