Best Family Board Games in the UK

We think Rummikub is the best family board game. The game is one of the most played numbers strategy games worldwide and suitable for up to 4 players, ages 7+. A real classic. In general, the tastes are of course different, which is why we can recommend each board game listed here for an evening of games with friends and family. 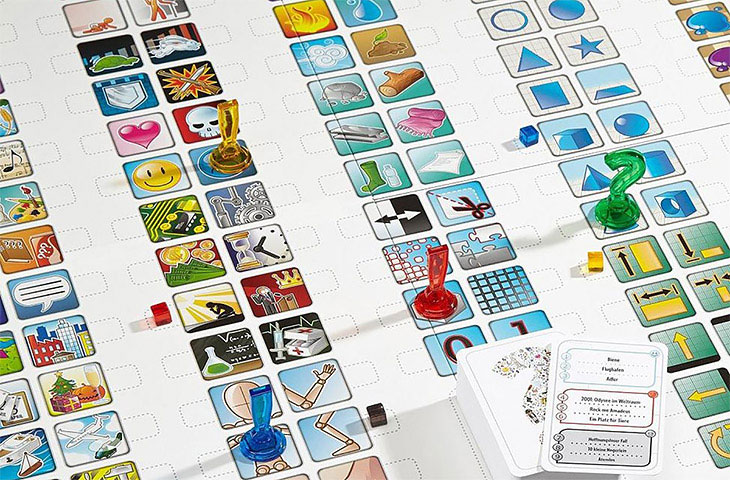 Nowadays the classic board game is more and more replaced by digital devices. Despite this, there are still many families who appreciate it when the whole family comes to one table to play a board game together. The weather leaves much to be desired and the children bombard the parents with the question of what could be done. In this case the popular classics for bad weather, namely board and parlour games, help. What is more fun than sitting together – a tradition that is already several thousand years old. Parlour games have been around for around 4,000 years and are still a popular pastime today.

Board and parlour games are particularly suitable for children for the purpose of developing group feeling and dynamics. The games require concentration and the ability to work in a team, but they also bring a lot of fun. This is a sensible change in times of smartphones, tablets and other electronic gadgets. Basically, parlour games are divided into board games, card games and dice games. Meanwhile, strategy games are also offered in all three variations, often offering very exciting build-up themes in a historical ambience.

1. What to Look out for When Buying? 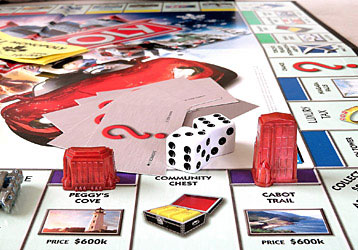 In terms of the number of people, there are games to suit every need. For example, games for two people are very popular with couples or families in which, for example, only one parent plays with one child. Should there be a lack of other players, such 2-player games offer a welcome change. But also for a larger number of participants is provided and there are also games for up to twelve persons and more offered.

Anyone interested in games suitable for children needs an overview of the age classification of games. The manufacturers of games offer the age indication on the game boxes as an aid. The majority of games, for example, have a direct indication on the box, either in the form of a lower age limit or a lower and upper limit. Serious online shops also refer to the age rating on their websites.

In a parlour game, rules and instructions ensure a pleasant atmosphere and equal and fair conditions for all players. Above all, a game manual must be systematically structured and understandable. With modern, more complicated board games, it often happens that the game instructions are read out at the beginning, but some players do not pay attention and then feel treated unfairly.

The playing time of today’s board and parlour games usually ranges from about 30 minutes to a little more than an hour. In general, however, the trend is towards shorter game durations. But also three hours or more for an interesting game like Monopoly is not uncommon.

2. Game of the Year Award

The fact that parlour games play a significant role in people’s leisure behaviour is reflected in the German Game of the Year Award. Since 1990, this game prize has been awarded for board and card game innovations. The prize is awarded to the best family and adult game and the best children’s game of the current year. The German Games Prize is awarded annually in October on the eve of the International Games Days at Messe Essen.

3. Winners of the Game Award 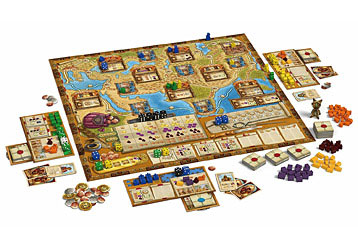 As winner of the year in the category “Best Family and Adult Game”, the game “The Voyages of Marco Polo” attracted some attention. At the end of the 13th century, the two dealers Niccolo and Matteo Polo set off on their second journey to the East. The young Marco, son of Niccolo Polo, was also there. As a player you slip into the role of one of the companions. The game lasts a total of five rounds, the player chooses an action and can choose in the meantime from various additional actions.

As winner of the year in the category “Best Children’s Game”, the game “Spinderella” won the sympathies of the jury. “Spinderella” is about ants and spiders. The ants hurry over the forest floor and above them three spiders lurk in their web on a second playing level. If, however, two of the spiders are moved, a magnet mechanism ensures that one of the spiders can abseil down its thread and catch one of the ants. The players move either their ant or one of the spiders.

As winner of the year 2016, the game “Mombasa” from the pen of Alexander Fister has clearly prevailed over the competition as the best family and adult game. This is a complex business simulation with clever action programming. Playably starting from 12 years the 2 – 4 players invest into a company in Africa, with which more understanding is in demand than luck. Goods such as coffee, bananas or cotton are traded.

The game with the name “Leo muss zum Friseur” (Leo Must Go to the Hairdresser) was named Children’s Game of the Year in 2016. The goal is to accompany Leo the lion to the hairdresser and to remember some things. The game is therefore a cooperative memory game from 6 years, which is suitable for up to 4 players. 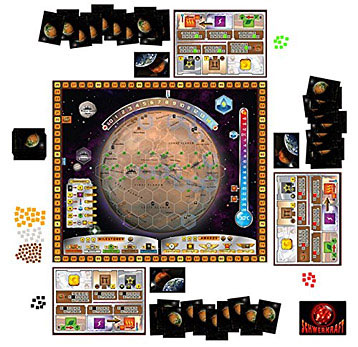 The game called “Terraforming Mars” is the latest winner of the game of the year. The game invented by Jakob Fryxelius is about making Mars habitable. Here the up to 5 players must advance the terraforming process and create Mars e.g. with breathable atmosphere and oceans full of water. But beware, the game has a duration of 90 – 120 minutes.

“Icecool” by Amigo was voted child’s game of the year 2017. In this fast-paced snip game, children play with penguin figures in a chic 3D design. The rules of the game are simple and understandable for everyone. The goal is to either catch all the other penguins or collect all the fish of your colour. The minimum age recommended by the manufacturer for the game is 6 years and is suitable for up to 4 players.

The game “Azul” is the latest winner of the game of the year 2018. In the game of Michael Kiesling players are invited to decorate the walls of the royal palace in Evora with tiles. The rules appear simple at first and are quickly understood. Over time it becomes clear that tactical understanding is necessary. “Azul” is a game with high replay value and addiction factor.

The game “Funkelschatz” by Lena and Günter Burkhardt was chosen as the children’s game of the year 2018. In the game, dragon children discovered an unusual treasure. In the middle of an ice column there are frozen sparkle stones. Together with Papa Drache, the ice ring is gradually removed to get to the beautiful sparkle stones. A beautiful game starting from 5 years with which the whole family participates feverishly.

As far as popular board and parlour games are concerned, there are a very large number of them. Some, however, have achieved a level of popularity that has turned them into classics.

Ravensburger can look back on a long history. Already in 1884 the first game with the name “Reise um die Erde” (Journey around the world) was presented by company founder Otto Maier. His goal at that time was to combine entertainment and instruction. The publishing house still publishes many titles today. With games such as “Scotland Yard” or “Labyrinth – The Moving Maze Game”, the publishing house has already received numerous game prizes. Meanwhile Ravensburger can call even a leisure park between the city of the same name Ravensburg and the Bodensee its own.

Kosmos is a media company based in Stuttgart and is certainly one of the best-known game manufacturers. The publishing house has innumerable games in its assortment that have already been voted Game of the Year or Critics’ Award. Among them are classics such as Catan, The Legends of Andor or Keltis. In the USA, the publisher’s games have co-founded the success of the German Games.

Pegasus Spiele has been active since 1993. The company, which is based in Germany, no longer only distributes games but also publishes successful parlour games. With “Camel Up”, “Istanbul” or “Kingdomino”, the publishing house has already received numerous game prizes.

The Heidelberger Spieleverlag was a German publishing house, which designed its business completely for games. Founded in the 1990s, the publishing house merged with the French games publisher Asmodée at the beginning of 2017. The publishing house has published classics such as “Civilization the Board Game”, “Codenames” or “Lord of the Rings the Card Game”.

Hans im Glück Spieleverlag has existed since 1983 and has already won numerous game prizes. For most of its existence, the publishing house consisted of a very small team. Nevertheless, the company was able to record a huge hit with the game “Carcassone”. The game was sold several million times worldwide.

Are There Similar Board Games to the Settlers of Catan?

The game principle of “The Settlers of Catan” is of course unique. If you don’t know them yet, you should take a closer look at the numerous expansions. There are a lot of like “Seafarers”, “Cities & Knights”, “Traders & Barbarians” as well as “Explorers & Pirates”. There are also a number of games that are represented in a similar genre.

What Are Escape Room Board Games?

Escape games or rooms are booming all over UK and Germany. The principle of the games: A group of people has to solve a puzzle or a task in a given time. At the end of 2016, Kosmos-Verlag also launched “Exit: The Game”, an escape game adventure based entirely on this model. It’s also nice that the expansions with additional cases are usually available at very low prices, at least if you own the original game.

What Was the First Board Game in the World?

The first records of games were only made in the 13th century. The “Royal Game of Ur”, whose origins probably lie in Mesopotamia, is considered to be one of the oldest and best known board games. During excavations in the 1920s, a British archaeologist found several game boards of a similar appearance. These were dated around 2600 BC. One of the game boards can be viewed in the British Museum in London.

Lena is a freelance editor and part of our team. She is interested in the latest beauty and fashion trends and thanks to her small family with her dog "Eddy" she is our expert in the categories household, leisure and drugstore.